skip to main | skip to sidebar

One of the best things about kilns is how maintenance-free they are. A quick vacuuming now and then to remove fiber powder or the odd piece of frit that slips away is really about all they need.

Oh yeah, and then there are the relays that control the click of the on-off-on-off electrical flow that's necessary to heat up and maintain the various temperatures we ask it to hold.

Eventually, relays fail. It's a known fact and an acceptable risk. Relays are easily replaceable, kinda' like a big fuse; I've done it myself when my last one died.

I'd heard that relays typically die in the "open"--or off--position, so you may find your kiln has shut off early. Now and then they'll die in the "closed"--on--position, which is what has happened to me both times I've experienced it. [Edit: a reader informed me after I posted this that I was misinformed; relays most often fail in the closed (on) position. Even more reason for me to adopt a replace-before-they-fail policy, in my opinion!]

The first time was no big deal. I programmed my kiln, left the studio and returned an hour later to find the controller displaying a temperature of over 1800°. Turning off the kiln didn't help (since the relay was stuck in the on position) so I had to unplug it from the wall. It wasn't a big deal, other than my glass art having giant bubbles blown through it. I purchased a new relay, read the instructions that came with my kiln, and replaced it. Plugged the kiln back in and everything was good to go.

Now, this is where I should've learned an important lesson. Relays aren't expensive; why wouldn't I simply put my kilns on a maintenance schedule and replace the relays annually or so, just in case? I'm still shaking my head over that one.

So the other day, I'm running both kilns nearly full time (because this kind of thing only happens when you have a show deadline) and since it's been about seven hours since I've been out to the studio, I decide to check that everything's powered down.

David walked out with me and said he smelled something burning but I'm familiar with the scent of burning Thinfire so I told him not to worry. That was until I saw the lid to my kiln warped with heat and showing a bright orange glow around the entire perimeter. The display was reading 2350° which is hundreds of degrees hotter than my kiln's 1700° rating. I felt quite calm, knowing what had happened, so I pulled the plug and let the kiln cool, sure in the morning I'd just replace the relay and get back to work.

Of course, the difference this time (and another good lesson to be learned) is that I don't know at what point in my firing the relay stuck on. It may have been at that temperature for almost seven hours...

Here's what it looked like when I opened it in the morning: 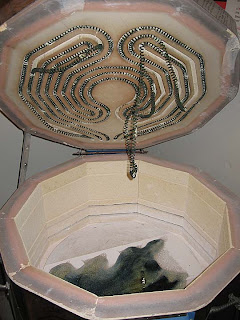 Those wires hanging down are the lid heating elements; that's not a good sign. The swirly muck on the shelf (which is ruined now) is my glass art. Looks like glass spin art or something.

Here's another view, looking down into the body: 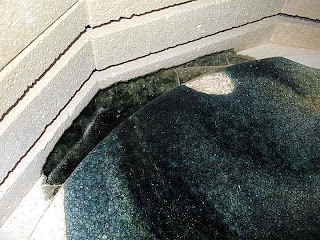 Now you can see why two things are important; 1) level your kiln and 2) kiln-wash the bottom of your kiln in case glass ever runs off the shelf for some crazy reason.

This didn't seem that bad to me until I removed the shelf and realized that what I actually had was a giant crater where glass had pooled and boiled to the point where it completely eroded the firebrick: 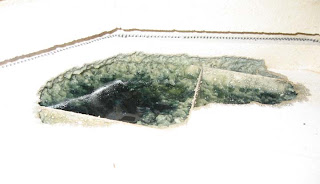 That photo above is deceptive. It's about 2" deep and runs very close to the heating elements in the side of the kiln.
So after taking stock and realizing my only choices were to buy a new kiln or try to repair this one, I contacted Paragon and sent them the photos. It's going to be time consuming and still cost quite a bit but I'm feeling somewhat more confident today.
Here's what I have to do; I'm so incredibly lucky that I already own a new lid with elements for this kiln. I had contacted Paragon a few years ago when I was unhappy that my elements were sagging a bit. They offered to ship me a new lid (with the elements encased in channels now) for the price of shipping. So I've saved about $300 there. I have to drill holes in the stainless steel lid to fit it to my kiln but I'll leave that to David. I've got to disconnect the control box and ship it to Paragon where it'll be retrofitted with two relays instead of one (this is something Paragon had offered on these kilns). I could just replace the single relay it has now and see if I'm ok but since I'm not using the kiln anyway it seems wiser to let Paragon do their thing. I have to get rid of all the melted glass because it would continue to heat and contract every time I use the kiln if I left it. So that's what I did today. I put on my safety equipment, grabbed a couple tools and excavated the floor: 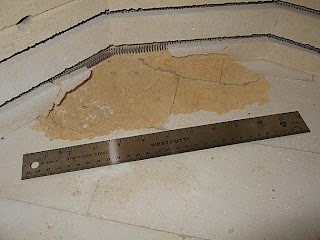 The crater that's left is about 3" deep. I'm concerned about the elements being exposed. The next job will be to either flip the floor of the kiln (still waiting to hear from Paragon about how that's done) or carve out cleaner rectangle-shaped holes so I can cement in new fire bricks. Here's the garbage I pulled out of the hole: 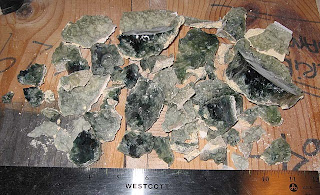 It's going to be a lot of work but so far, so good. I'll be stocking up on relays and hopefully will never deal with another melt down! While this looks awful, the fortunate thing is that my kilns are all safely installed with plenty of space around them. They sit on metal kiln bases on cement cinder blocks on a cement floor. Stay tuned; I'll post photos as I continue attempting to rescue my little workhorse!
Posted by Valerie Adams at 2:17 PM

Wow, you are right! Some of these pictures look exactly like mine. What a sickening feeling. At least I expected disaster when I opened the kiln. You got a BIG surprise - and not the good kind. I am happy to hear your kiln is back in action.

I've had a few relays go, and always stuck in the "on" position. No damage like yours yet, but I plan to order extra relays and start replacing on a regular basis. Great idea! 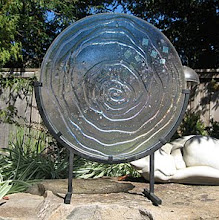 Links worth a look:

Valerie Adams
Santa Rosa, CA
Welcome! For years I've been a wannabe journal-keeper but realize it's been more about the pleasure of collecting wonderful blank books and writing tools than the actual recording of events... Plus, what's the fun of writing it all down without getting to share just a bit? So today I'm embarking on what I said I'd never do; I'm starting this blog in order to share some new work, thoughts about what inspires me, and anything else that belongs on my website but that I so seldom get around to updating.